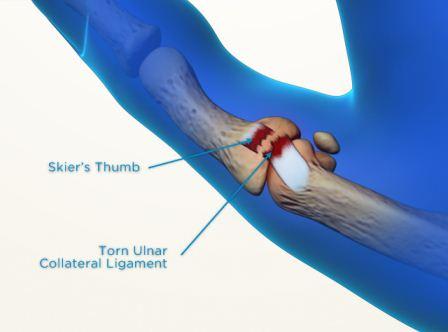 The ulnar collateral ligament of the thumb (first metacarpophalangeal joint) is frequently injured in sporting pursuits, leading to pain and instability in the thumb. The injury is from a force that pushes the thumb away from the fingers, resulting in pain, bruising and swelling in the area. The injury may be due to a single force, or may be due to repeated forces.

How bad is my injury?

A grade 1 injury is less severe than a grade 3 injury.

How is a UCL injury treated?

The treatment depends on the severity of the injury. Grade 1 and 2 injuries are treated by splinting, generally for eight weeks. Grade 3 injuries are most commonly treated with surgery. In all instances you will be referred to a hand therapist as part of your treatment for splinting, education and rehabilitation.

How is the injury diagnosed?

In many instances the injury is diagnosed on the basis of clinical examination by your surgeon. The diagnosis can also be confirmed through ultrasound examination or MRI scan.

What does the surgery involve?

Surgery is performed for complete ligament rupture, and may either be done early or (if the diagnosis is delayed) late.

When done early, the surgery generally involves repairing the ligament with sutures.

When performed late, the surgery may involve reconstructing the ligament. The surgery is technically more involved than a simple repair, although the recovery period is generally similar. The ligament is reconstructed by taking tissue from elsewhere, commonly from a tendon in the wrist, and using this to reconstruct the ligament. A temporary wire is more likely to be placed across the joint for a reconstruction. This wire is removed 4-6 weeks after the initial surgery.

In both instances you can expect to be wearing a splint full time for 8 weeks after the initial surgery.

What are the possible complications?

The most common complications or side effects of surgery are of temporary alteration in sensation of the skin around the site of the surgical incision, and of stiffness of the joint. These problems generally resolve with time. It is also possible that you could have ongoing discomfort, instability or pain; anaesthetic complications; scar tenderness or hypersensitivity; a need for further surgery; failure of the surgery to resolve the presenting symptoms; troubles with unsightly skin scarring; joint damage related to delayed diagnosis and treatment; infection; temporary bruising.