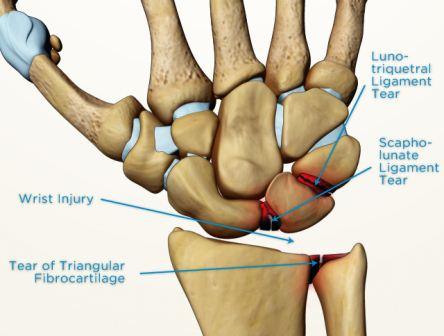 The scapholunate ligament is the most frequently injured ligament in the wrist, so is a common cause of wrist "sprains". A significant injury can alter the way the small bones of the wrist interact, and this can lead to cartilage wear and osteoarthritis. A scapholunate ligament injury commonly co-exists with other wrist injuries such as a wrist fracture or TFCC injury. Treatment of both acute and chronic injuries can be challenging.

What are the symptoms of a scapholunate ligament injury?

Often a fall has been the cause of the injury, and symptoms of wrist pain follow. There may be swelling, reduced grip strength, pain over the area of the scapholunate ligament and a sensation of instability of the wrist with actitvities.

How is a scapholunate ligament injury diagnosed? 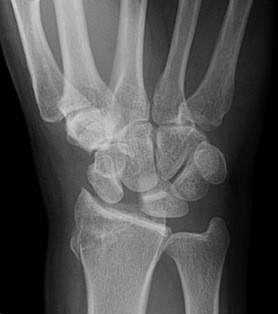 A hand surgeon will usually make a provisional diagnosis based on the symptoms and examination findings. Further investigations that may be ordered include x-rays (including stress views where you are asked to grip something while the x-ray is taken to increase the likelihood of seeing a widened gap on the x-ray, and x-rays of your "normal" wrist for a comparison) and a MRI scan. The diagnosis can also be made through arthroscopy, although most patients prefer the option of having an MRI to having an operation. A MRI scan is the best non-surgical way to assess the extent of the injury to the ligament.

What is the significance of a scapholunate ligament injury?

The scapholunate ligament is the main stabiliser of the scapholunate joint, which is a joint between two of the small bones of the wrist - the scaphoid and the lunate bones. Normally these two bones are held closely together by the ligament and move seamlessly together. When the ligament is significantly injured the mechanics of the wrist are disrupted. The carpal bones move in a disjointed fashion, which can cause pain and gradual damage to the joint surfaces, leading to early arthritis. The injury to the ligament can be partial or complete, so there is a spectrum of "scapholunate instability".

How are scapholunate ligament injuries treated?

Treatment varies depending on the severity of the ligament injury and individual factors (such as your age, your preferences, your other injuries and the demands you place on your wrist).

Partial injuries where there is no instability of the scapholunate joint are most commonly treated with splinting or casting, anti-inflammatories and hand therapy. Surgical treatments including arthroscopic debridement and thermal shrinkage of the ligament have been used.

If the ligament has ruptured recently it may be possible to repair it surgically, often using stitches that are held to the bones with a small permanent metal anchor. The wrist bones are held together by temporary internal wires to allow the repair to heal, and a splint or cast must be worn for weeks. Some surgeons advocate placing a temporary screw between the scaphoid and lunate bones for 4 months; this is a more rigid way of stabilising the bones than using internal wires. Rearrangement and stitching of the wrist capsule to reinforce the area (termed a "capsulodesis") is always done at the same time to improve results.

If it is not possible to repair the ligament then a ligament reconstruction can be used, taking a portion of a wrist tendon to recreate the ligament. This surgery also requires the use of temporary wires to hold the scaphoid and lunate bones together. Other techniques have been tried in the past but have been abandoned (such as bone-ligament-bone reconstructions and fusion of the scaphoid and lunate).

If the mechanics of the wrist have been altered chronically then surgical options for salvage of the wrist include a "proximal row carpectomy" (removal of the scaphoid, lunate and triquetrum bones) or a "four corner fusion" (removal of the scaphoid bone with fusion of the capitate, hamate, triquetrum and lunate bones). Where there is advanced arthritis then a wrist fusion may be indicated instead of these salvage options. A wrist replacement ("wrist arthroplasty") may be an option in older patients who have low demands on their wrists and wish to retain their range of motion, but wrist replacement remains a relatively new and untested procedure that has significant failure rates.

In this video Dr Steve Moran from the Mayo Clinic discusses the diagnosis and treatment options for injuries to the scapholunate ligament.

For an assessment of your wrist injury please contact Melbourne Hand Surgery to arrange a consultation with surgeon Dr Jill Tomlinson.