Melanoma is the most dangerous form of skin cancer. It develops from the melanocytes in the skin and mucosal membranes. Melanoma is responsible for most skin cancer deaths and is unfortunately on the increase. Australia has the highest rate of melanoma in the world; one in 14 Australian males and 1 in 22 females will develop melanoma in their lifetime (to age 85). Early diagnosis is extremely important, as early treatment is usually curative (95%).

What does treatment involve?

A melanoma requires surgical treatment. It cannot be treated with creams or laser. The accepted and recommended treatment of a melanoma involves:

Removing an appropriate margin of skin with the melanoma reduces the likelihood of the melanoma recurring at the initial site. The recommended margins vary from 0.5cm to 2cm according to the depth of the melanoma, which is measured under a microscope by the pathologist. It is simpler and less disfiguring to take a large margin if the melanoma is on the back than if it is on the eyelid, so the site of the melanoma also plays a role in the decision.

Surgery can be done under local anaesthetic, or under sedation anaesthetic, or general anaesthetic. If a melanoma on the back of the hand or on the forearm is small it will likely be excised and the skin edges stitched together. If it is bigger then a skin flap or skin graft may be required. Your surgeon will explain the options, risks and benefits of each type of reconstruction to you. You will usually require at least two surgeries for a melanoma. The first surgery is needed to confirm the diagnosis, and the second surgery is to take a sufficient margin of tissue after the diagnosis is confirmed. If your pathology results show that the melanoma has not been completely excised then you will require additional surgery. 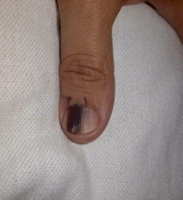 If the melanoma is located under the nail then amputation of the end of the finger or thumb is recommended, with the amputation including both the distal phalanx and the end joint. These types of melanoma are termed "subungual" melanomas (sub = under, ungual = nail). It is important to realise that subungual melanomas can co-exist with nail trauma - this 2011 article in the British Medical Journal shows photos of two patients who were referred with a non-healing subungual problem 8 months and 2 years after initial trauma, and were found to have subungual melanomas requiring amputation. If there is uncertainty about a skin lesion it should be referred for specialist assessment and biopsied.

During your recovery you should keep your hand elevated higher than your heart to reduce swelling and keep your dressings dry and intact. A sling may be helpful in keeping your hand elevated. The surgery is not usually particularly painful and usually over the counter medications such as paracetamol and/or ibuprofen will be sufficient to keep you comfortable. Your surgeon may place a splint on your hand to reduce movement during the healing stage, to prevent you stretching out the wound in the first 1-2 weeks. Your surgeon will usually be able to predict this before the operation so you can plan how much time off work or how much assistance at home you will need.

Possible complications or outcomes of the excision of a melanoma on the upper limb include:

Melanoma thickness is important in determining the risk of a new melanoma. It is measured by a pathologist under a microscope, and is determined in millimetres from the skin to the deepest melanoma cell. Thicker melanomas have a greater risk of spread; thin melanomas have a better prognosis.

If your melanoma is described as in situ then the pathologist has seen that the abnormal cells are only in the epidermis and have not penetrated into the deeper tissues (the dermis or the subcutaneous tissue). In situ melanomas do not have the potential to spread and are not considered life threatening.

Invasive melanomas have cells that have penetrated from the epidermis through into the dermis. The deeper the penetration, the higher the risk of spread to lymph nodes or other body organs.

The role of sentinel lymph node biopsy (SLNB) in melanoma is considered controversial because it has not been demonstrated to improve survival in melanoma. Studies are underway to determine whether SLNB should be recommended or not, or to whom it should be recommended. Your surgeon will be able to discuss sentinel lymph node biopsy with you and advise you accordingly.

Sentinel lymph node biopsy is not usually a complicated operation, but it can have complications and after-effects which you should discuss with your surgeon before the surgery. Complications that can happen close to the time of surgery include infection, bleeding, the development of a seroma (a collection of lymphatic fluid that may require repeated drainage), delayed wound healing, pain and numbness of the overlying skin. One of the later complications that can develop is lymphoedema, although this is uncommon because only a couple of lymph nodes are removed.

Melanoma and the lymph nodes

Melanoma may have already spread to the lymph nodes at the time of diagnosis, or it may occur in the years after diagnosis. Importantly, this is not the case for the majority of people.

If you have had a melanoma and you notice a new lump in a lymph node site then you should draw this to the attention of your doctor within a week. Commonly a scan will be performed, you will be referred to a melanoma specialist and a biopsy will be recommended, using a needle to aspirate cells from the lump which are then examined under a microscope looking for melanoma.

Lymph node dissection can have complications and after-effects which you should discuss with your surgeon. Complications that can happen close to the time of surgery include infection, bleeding, the development of a seroma (a collection of lymphatic fluid that may require repeated drainage), delayed wound healing, pain and numbness of the overlying skin. One of the later complications that can develop is lymphoedema. This complication occurs much more frequently with full lymph node dissection than with a sentinel lymph node biopsy, because the operation is much more extensive.

What about chemotherapy, radiotherapy or other forms of treatment?

Chemotherapy, radiotherapy, CT scans, MRIs, lymph node biopsies and blood tests are not a routine part of melanoma treatment. If you have advanced melanoma or suspicious symptoms or signs your doctor may organise additional tests. If you are taking part in a trial you will often have scans before, during and after the trial, so that any changes can be detected. Routine scans have not been found to be worthwhile for people who have been diagnosed with early melanoma.

Do I need to go to a specialist melanoma unit or centre?

Assessment at specialist melanoma unit or centre is not required for people with an uncomplicated melanoma. Most melanoma patients in Australia are not treated at such a unit.

If you have a melanoma that is advanced or unusual then assessment by a melanoma unit may well be of benefit. Melanoma units have experts from multiple fields including dermatology, palliative care, nursing, medical oncology, radiation oncology, surgical oncology, psychology, head and neck surgery, neurosurgery, plastic surgery and general surgery. Many melanoma units undertake research into melanoma treatments and participate in trials that cannot be accessed elsewhere. These trials are generally only applicable to patients with advanced melanoma.

Melanoma units also have staff and dedicated melanoma nurses who are very experienced in dealing with melanoma patients and their families. Many people find the counselling, psychological support and individual advice offered of immense value when coming to terms with a life threatening or potentially life threatening cancer.

MoleMap : full body photography and dermatoscopy services where the images are examined by qualified dermatologists. Please note that no melanoma surveillance service is 100% accurate and MoleMap is not a substitute for seeing your doctor or specialist for regular skin checks, especially if you are at high risk of developing melanoma or other skin cancers. If you don't wish to visit a commercial service for full body photography you may wish to consider asking a family member or friend to take high quality digital photos of your skin. If you do this it is necessary to record as much of the skin surface as possible, as melanomas can develop on previously clear skin, not just in areas where you already have moles. Understanding Melanoma - a 56 page booklet on melanoma, produced by the Cancer Council of Victoria, is an introduction for people with melanoma, their families, carers and other affected people. It describes the causes of melanoma, its diagnosis and treatment.

Skin cancers account for 80% of all newly diagnosed cancers

Two in three Australians will be diagnosed with skin cancer by the time they are 70
Source: Cancer Council Australia

Every year in Australia around 434,000 people are treated for one or more non-melanoma skin cancers. In 2007, 448 people died of the disease.
Source: Cancer Council Australia